Gin Rummy is the most popular 2-player card game of skill in English speaking countries. Do you know that even the former US president plays Gin Rummy with his aides and adisors? At GameColony.com, online gin is played by two players with a standard 52-card pack. Players can select the maximum points for a game (from 50 to 300).  In a standard 100 point game, the winner will be the 1-st player who reaches 100 points which may take several deals.


The object in gin rummy game is to collect sets or runs of 3 or more cards that ‘go together’. Such matching collections of cards are called melds.The melds either have to be of the same rank, like all sevens, or forming a sequence of the same suit – like 7,8,9 of hearts.


The melds that a player is building may be either a set or a run of cards:

Examples of a set: K

Examples of a run: 3

At the end, whatever cards are left in player’s hand that are NOT in melds, are called deadwood.  Deadwood incurs penalties equivalent to the sum of their values.   In the course of the game, players would try to discard unwanted cards and collect cards that would form melds.

In the example on the left, the player's own cards are on the bottom (they are open) & the opponent's cards are on top (close d).

It is the turn of the 'bottom' player whose cards are visible to make a discard (there are 11 cards in hand).
The player is about to make a discard by dragging one of the cards from hand to cover the up card (10 of Diamonds).


In online gin rummy, 10 cards each are dealt to 2 players. The 21-st card is opened face up and put next to the deck. This card is often referred to as upcard or up card. At each turn players draw a card by dragging it or double-clicking it from either the closed deck or from upcard. When a player discards a card (by either dragging or double-clicking), the discarded card is placed on top of the current upcard effectively becoming the new upcard.


Only at the very start of gin-rummy game, either player (starting with the non-dealer) gets a choice either to exchange one of the cards from their hands with an upcard or to select a Pass button to pass this opportunity. Until 1st upcard is either passed or exchanged by both players, no drawing from the closed deck is allowed.


If both players pass (refuse) the very first upcard, the non-dealer must start a game by drawing the top card from the closed deck. He adds this card to his hand and discards ANY card on top of the original upcard to build the waste pile.


Thereafter, each player in turn must draw and add to his hand either the unknown top card from the closed deck OR the known upcard on the very top of the waste pile. In either case, the online player completes his turn by discarding one card face up to the waste pile. It is not permitted to draw the upcard and discard it on the same turn.


A hand consisting entirely of melds with no deadwood is described as gin and carries a bonus. The on-line player, however, does not have to wait for gin but may end a game as soon as the total value of his unmatched deadwood is 10 or less. (This is called maximum knocking value. It is set at 10 for pure gin rummy.


During online play melds are not revealed – they are kept secretly in hand.


When on line player is satisfied with the low value of deadwood in his hand, he ends the game by ‘theoretically’ knocking on the table AFTER he has drawn an 11-th card and BEFORE discarding the last card [knock button]. The final discarded card is placed face up on the closed stock. It is very important to place the final discard onto the closed stock.

Knocking will be disallowed if the auto-calculated deadwood in knocker's hand is greater than the maximum knocking value.
After knocking, both the knocker and the opponent will see their cards on the table face up, arranged in melds. The knocker's opponent has the privilege of ‘laying off’ any cards of his own deadwood that may be matched with any of the knocker’s melds in order to reduce the penalty value of his deadwood. This privilege does not apply if the knocker has a gin hand with no deadwood. When both players' cards are shown, the opponent of the knocker can lay-off or attach his own deadwood cards to opponent's melds by dragging the cards towards opponent's meld. If a knocking (ginning) player has a gin hand, still the same 'Knock' button has to be pressed and the extra 11-th card has to be discarded. The system will determine automatically whether it was a gin hand or not.


If the knocker has the lower count of deadwood, he scores the the difference between their values of deadwood. For gin, the knocker adds a 25 point bonus.


If the knocker has higher or equal value of deadwood, the knocker receives a 25 point penalty for undercut plus any difference in deadwood values.


The 2 last cards of the deck may not be taken. If neither player has knocked before then, the hand is declared a draw and the deck is reshuffled for the next hand.


The score is kept cumulatively for each player on line. The winner adds his score for the hand to his previous total in order to make it clear when 100 has been reached or exceeded. At GameColony.com 100 total points is a default setting, but players can choose 50, 100, 150, 200, 250, 300


The game ends as the player reaches the agreed upon number of points.


Finishing the hand and the 50-th card rule

To clarify, the 50th card rule relates to the situation when there are just 3 cards left in the closed stock and the hand is not over yet. Below is a step-by-step description of the game play and possibilities:

(1) Player A takes the 50th card and does not knock

(2) Player A discards some open card to a discard pile

(3) At this time, Player B has an extra "Pass" button that lights up. Player B also has a red 'guiding' message saying that it is possible to click the "Pass" button & draw this hand OR take this open card and knock

4) If Player B does not knock, he/she discards some card to a discard pile and the hand is finished in a draw

Auto-selection and player selection of melds at knocking


By default, the melds in gin rummy are auto-selected at knocking.
(Melds are shown as straight vertical or horizontal lines drawn on cards unless the non-default option "Don't Mark Melds" is used.)

In the case of multiple possible melds (e.g. intersecting melds as in the picture below), only the optimum meld gets auto-selected.

Depending on the game, gin rummy players may want to select a non-default table setting named 'Knocker Selects All Melds'.

If a player knocks in a way where multiple meld-wise interpretations of the knock are possible, there's no need to rely on computer auto-selection of melds. It may useful, for example, when a knocker is aware of certain possible opponent's lay-offs (either vertical or horizontal) that the knocker wants to avoid.

For manual meld selection, a player can select (even right before knocking) another Table Preference "knocker selects All Melds". With this option, the player will be in control of how to mark/select melds at knock time.

In the picture below, the possible melds intersect and the numerically optimal meld is marked. By using the light-green dialog, you can re-mark selected melds, using 'Next' button or you 'OK the currently selected meld. 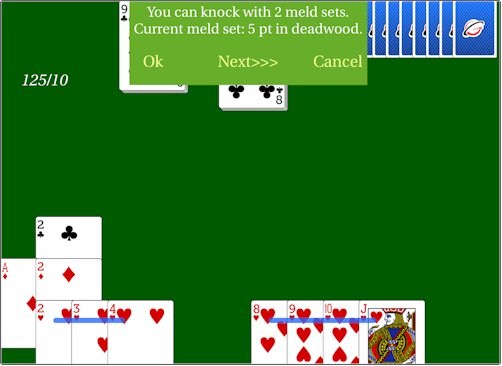